Categories Menu
Home » Uncategorized » Helping Someone Who Is Choking

Helping Someone Who Is Choking

A person chokes when the airway is partially or entirely blocked and airflow to the lungs is condensed or cut off. The choking victim either has difficulty breathing or cannot take in air at all. A choking casualty might pass on if first aid is not given straight away.

Breathing is a vital part of our existence. When we breathe in, we inhale in a blend of oxygen, nitrogen and carbon dioxide 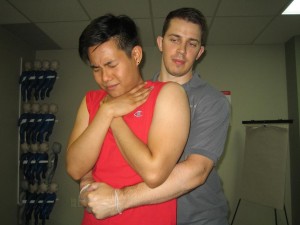 A person chokes when the airway is partially or entirely blocked and airflow to the lungs is condensed or cut off.

The most obvious sign of choking is clutching of the throat. As a first aider, you need to know how to recognize whether a choking person has a mild or severe obstruction because the first aid is different for each.

There are two choking situations you may have to deal with:

The first aid you give depends on the casualty’s age. In first aid for choking, an adult is post-puberty, a child is between one year and puberty, and an infant is under one year. The casualty’s size must also be considered. There are variations in the techniques for a casualty who is pregnant or larger than the first aider or in a wheelchair.