Diaper rash is a common skin condition that frequently occurs in infants between four and fifteen months old. It is a form of eczema/ dermatitis/ skin irritation that develops underneath the infant’s diapers.  It appears as bright, red and inflamed skin commonly on the buttocks of the infant. However, when the irritation is more severe, it can spread to the groin, thighs and stomach.

Diaper rash is generally mild and can usually be treated at home, even with the absence of professional help. However, if the irritation is not given treatment for a long period of time, it can become more severe and cause complications. Intensity of symptoms will depend on the length of time before treatment is given.

There are many possible causes of a diaper rash, but the most common are irritants against the skin.  The following may lead to diaper rash:

The following symptoms are usually indicative of a diaper rash:

The main goal of treatment for diaper rash is to limit the discomfort experienced by the infant and to prevent complications from developing. Apply first aid to help treat diaper rash. Learn how to apply first aid in infants and children by enrolling in First Aid Classes and CPR Courses. The following tips can be done: 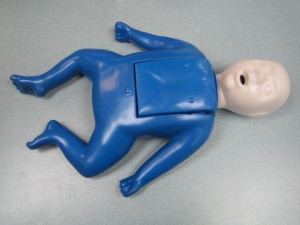 Diaper rash is a skin problem that is common in infants between four and fifteen months. It appears a bright red skin on the baby’s buttocks.