Posted by vanfirstaid on Mar 10, 2013 in Breathing Emergencies | 0 comments

Smoke inhalation occurs as a result of breathing in poisoning gases, soot or smoke from a fire nearby. Smoke contains toxic substances such as carbon monoxide that inhibits the body’s oxygen supply. Moreover, prolonged exposure to smoke can also cause lung damage, damages to the airways and poisoning from the chemicals absorbed in the lungs. The leading cause of deaths related to fire, are not caused due to getting burnt or injured by the fire, but inhaling its smoke alone.

A person suffering from smoke inhalation may experience symptoms such as wheezing, breathing difficulties, headaches, chest pain, fainting and cyanosis. Prolonged exposure may result in coma or even death.

Smoke inhalation is often treated at the hospital using oxygen therapy, intravenous fluids and bronchodilator medications. People suffering from severe smoke inhalation may be kept under a ventilator for breathing support.

Important Disclaimer: this post on smoke inhalation is for learning purposes only. To learn about recognizing and managing breathing emergencies and inhaled poisons enrol in workplace approved first aid and CPR classes.

Smoke from fire contains a low oxygen amount and a very high amount of carbon dioxide and carbon monoxide, which deprives the body of its oxygen supply. There are many other chemicals in smoke that may be toxic to 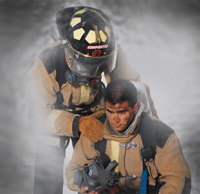 the body. Moreover, smoke from fire can damage the lungs, airways and cause poisoning if toxic chemicals are absorbed into the body.

The following are some toxic chemicals that may be present in smoke:

Signs and symptoms of smoke inhalation

To learn more about breathing emergencies and poisons enrol in a workplace approved first aid course near you (more information).